The Eaton Collection and New AccessionsThe Hurricane of 1938

The Eaton Collection and New AccessionsThe Hurricane of 1938

75 years ago this September a hurricane with no name slammed into our shores and wreaked more devastation than any storm had in 70 years — or has since. It had no name because storms didn’t then, but it’s picked up a few catchy handles in the meantime: “The Yankee Clipper”, “The Long Island Express”, “The Great New England Hurricane”, or the one we hear most often today: “The Hurricane of ‘38”.

The storm also had no name because no one expected it. 1938 was the end of New England’s hurricane innocence, when a nascent but still hidebound national weather bureau was content to ignore junior re- searcher Charlie Pierce’s correct storm track prediction because, in a nutshell, “hurricanes never do that” — they “always” curve out to sea. In ‘38, before computers and satellites, we relied more on instinct, and instinct relied on experience. Few if any had experienced the brutal 1869 Saxby Gale, let alone the 1821 Norfolk and Long Island Hurricane or the Great Colonial Hurricane of 1636.

How bad was it? As the category 3 hurricane tore a path across Long Island, Rhode Island, Connecticut, Massachusetts, Vermont and into Quebec, it left 63,000 homeless, took almost 700 lives, wiped entire seacoast towns off the map and downed an estimated 250 million trees — including one third of Vermont’s sugar maples and half of New Hampshire’s white pines. For Woods Hole and Falmouth the losses — in life, limb and property — were proportionately worse by far than in any storm since.

The fact that bigger storms have made landfall without causing nearly so much loss of life — 380 died that day in Rhode Island alone — was not only because of the lack of warning. The ‘38 storm reached a forward velocity of 70 mph — the fastest traveling speed ever recorded for a hurricane. Even if newspapers on the morning of the 21st had found room alongside headlines about Hitler’s manhandling of Czechoslovakia to mention the onrushing storm, many residents would have struggled to stay out of its way. Waters rose too fast, roads were cut off, escape quickly became impossible.

This was certainly the case in Woods Hole. “The water rose 20 feet in 20 minutes,” remembers Prosser Gifford of Penzance Point, who was nine years old when the storm hit that September. “You couldn’t design a worse storm for this area.” Wind and waves thundered in from the southeast, straight down the pipe through the one unprotected compass direction into Great Harbor. “People were down along the shore,” Gifford explained, “watching their boats and docks as they blew in.” As a result, many were unprepared when “the real water came at them from behind.” Hurricane winds had plowed a massive storm surge into Buzzards Bay, where it piled up with no place to go. “So it came up over the land,” said Gifford. “Water was going four or five knots right through downtown Woods Hole.” 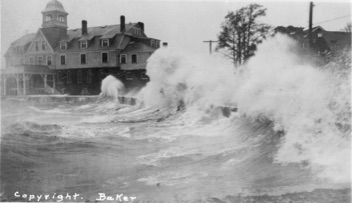 Waves breaking over sea wall near the Fisheries, September 1938. Photo by Baker.

Two daughters of fish market owner Sam Cahoon, Frannie Shepherd and Cynthia Smith, both of whom grew up in Woods Hole and still live here, had their own memories of the storm. Frannie, a high school junior that year, described braving wicked winds to wade through floodwaters near the Veeder house on Albatross Street. “It was bad, but we didn’t know it was bad. We were girls. It was fun,” she explained.

Cynthia was studying business at Bryant College in Providence when the storm roared through. “I was walking home from class with a friend and things were blowing all over the place.” Then, unexpectedly, “the sun began shining. This must have been the eye that we wandered into. We hopped over wires and branches and everything to get to our dormitory.” Hours later, some boys from the college suggested a tour to see the damage. “So we went as far as we could down the hill, and there was water all over. The city was under water.” One of the boys she was with “got hit with a sign blowing off a building, right in the head no less,” Cynthia recalled, adding, “but he made out all right.” The boy wasn’t injured. He was one of the lucky ones. The next day, “My father came up with a truck, loaded with boxes of fish.” Sam Cahoon delivered his load and then took his daughter back home to Woods Hole.

Prosser Gifford’s memories were also colored by his youth at the time. “I remember going out onto the porch in the wind and leaning into it at a 45 degree angle.” Exploring the wrecked town the next day, Gifford recalled seeing a car that the storm had had its way with. “The water had spun it around like a stone on the beach, using it like a drill. It was down below road level, with no paint left on it.”

The hurricane had turned Penzance Point into an island. A temporary bridge had to be built to reconnect it.

From their location between Vineyard Sound and Buzzard’s Bay, the Gifford family had a unique vantage on the rising danger of the storm. “It was great fun at first, but soon we began to see it was more than fun. We were watching the trouble in the harbor, boats beginning to drag, and then somebody said, “ ‘You’d better look the other way.’” Turning toward Buzzard’s Bay they could see the ocean surge coming. This was the rushing water that would take five local lives, including three Coast Guard members killed while rescuing stranded civilians. “Nobody had a sense of how big or how terrible it was,” Gifford said.

Gifford got his own taste of terrible September 22nd. “We went down to see which boats had come ashore and what shape they were in. Our dock had blown ashore and I was jumping off it, and I landed on something that I thought was a pile of seaweed. It was rather squishy.” It wasn’t a pile of seaweed, as Gifford discovered. “It turned out to be Mr. Briggs.” William Briggs had been drowned the day before in the deadly sweep of the storm surge. 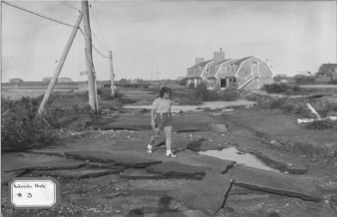 The causeway to Penzance which was destroyed in the 1938 hurricane. The water rushed from Great Harbor into Buzzards Bay over this point, then reversed and swept people away.. Four of the five people killed, 3 Coast Guard men and one of two Penzance caretakers were all drowned here.

Local losses were steep. Scores of boats were sunk or reduced to “kindling.” Numerous buildings across Woods Hole and Falmouth were destroyed, many never replaced.

Asked of his lasting impressions of the ‘38 storm, Gifford said the gale was loud and impressive, recalling that at Nobska Point “they found the wind meter broken at 127 knots.” But “the truly amazing thing was the water.”

Many of the hardest hit victims of Superstorm Sandy might say the same.

Just because the last two most destructive New England hurricanes hit 75 years ago and 70 years before that doesn’t mean we’re due for the next big one this year. But all history, recent and otherwise, reminds us that these events happen, and one of the best ways we can prepare is to remember.