The enchanted Golden Age of yachting during the years of approximately 1880 to 1895 was also a time of enormous proliferation of summer mansions, often called “cottages”, along the New England coastal shore. The available waterfront property with views of oceans, bays and sounds filled rapidly. The building of large yachts continued but small boats such as cat boats became popular, finding excellent anchorages in harbors, coves and inlets. Buzzards Bay was considered at that time the finest sailing area on the coast, having warm deep water, excellent winds and many harbors to cruise but most of all being a place to race. Newport became the racing Mecca during the Golden Age but Buzzards Bay was its equal in small boat racing in one-design classes.

In 1892 Alfred Craven Harrison retired from his presidency of the Harrison, Frazier Company, a large sugar refinery in Cuba. He sold his partnership to the American Sugar Company and he returned to his family home in Philadelphia. He continued his activities in philanthropy and in various clubs, especially the Corinthian Yacht Club of Philadelphia. Alfred married Kate de Forest Sheldon in April 1872. Her father was President of the New York Bank and Trust. Mrs. Harrison became interested in Woods Hole as a possible summer residence. She had heard of Mr. Mahlon Ogden-Jones who had built a summer “cottage” designed by Edmund Wheelwright. The estate was on three acres overlooking Little Harbor, Woods Hole. Queen Anne motifs dominated the interior of the house, tall chimneys, varied roof-lines, and leaded glass windows. In 1892 the Mr. and Mrs. Harrison bought this estate from Mr. Ogden-Jones. 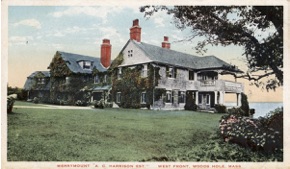 Mrs. Harrison was born into a world of both Edwardian and Victorian conventions. She understood the lavishness created by this period. Hers was not the role she sought, but one she accepted with grace and responsibility.

There were invitations into Little Harbor’s society by the Luscombes, Fays, Carltons, Cranes and others. Mrs. Harrison organized picnics, chowder parties, and trophy dinners to celebrate sailing activities.

Both parents were avid sailors but they needed more experience in racing. Neighbor Walter Luscombe introduced young Sam Cahoon, a skilled racer of spritsails, to the Harrisons as a boatman. They gladly hired Sam Cahoon as a “boat boy” to maintain their boats and to crew for the family. They admired his sailing ability and also used him as a tennis and swimming teacher for their children. After Sam’s graduation from high school in 1896, he became the Harrison’s sailing master and captain, eventually moving onto the estate. 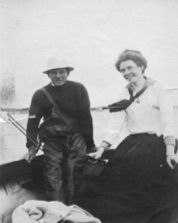 The Woods Hole Yacht Club was commissioned in 1896, followed by many years of informal racing in classes of spritsails and catboats. The Harrisons purchased two spritsails in 1897, the WIZARD and then a new spritsail design by Nat Herreshoff which they christened DUDE.

At the turn of the century catboats were the most popular design for small sailing crafts. They were exceptionally comfortable for families that enjoyed “noon lunches” and swimming from the boat. The Harrisons had a 25’ catboat built in Monument Beach and christened her LA PESCADORA.

In 1897 William Frazier Harrison, Alfred’s son, became a member of the Beverly Yacht Club at Wings Neck, Pocasset. The Club had a reputation for fast boats and experienced captains and crews. A new 1902 racing design from Nat Herreshoff’s lines was commissioned for the Club. Thirteen boats were bought including one for Alfred Harrison. The class was called “Buzzards Bay Thirties”. The boat was 46 feet with a sail area of over a thousand square feet. The new owners were thrilled to have such a fast boat. Alfred Harrison christened her QUAKERESS II and for the next eight years she was maintained and sailed under the command of Captain Cahoon. 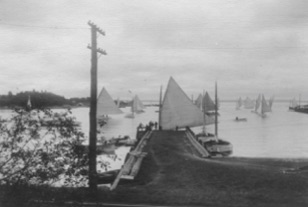 Catboats in Little Harbor, c. 1910. The Harrison’s house may be seen in the left background (chimneys). (Sarah Bryant Fay photo)

QUAKERESS II was sailed to Cuba for the winter months following the summer race series in Buzzards Bay. Mr. Harrison’s sons, Alfred Jr. and William, spent the winter in Cuba enjoying the high society and exciting racing. By 1909 QUAKERESS II had been sailed hard under all conditions. Mr. Harrison recognized she was no longer a secure boat and had Captain Cahoon and his mate sail her to Philadelphia for spring racing in calm waters. A grand celebration was given to Captain Cahoon for his loyalty to the family and an ovation to QUAKERESS II.

World War I had begun in Europe causing the family to return to Philadelphia. Mr. Harrison’s health had failed and his sons found less time for racing. “Harrison House” was sold to Mr. Newcomb Carlton in 1914. He rented the house to the Harrison children until he moved into it in 1925.

Alfred Harrison died in 1927 at 81 years old and Kate died in 1935 in the family home in Loverock, Pennsylvania.