Stories from our Oral History Collection of Conversations

Ed Jaskun, long-time pharmacist in Woods Hole, bought a three-story building along the Eel Pond Channel (currently the site of WHOI’s Redfield Building and its parking lot) in the 1940s. In 1962 when Redfield was built, he moved to the corner of Water Street and Luscombe Avenue, the current location of Coffee O. Here are some anecdotes about his view of Woods Hole and his time along the Eel Pond Channel from a Conversation in 1979.

“Oh, I used to fish out the window when it was quiet. Of course when I first came here, it was quiet, believe me. I’d ignore customers if the fish were biting, you know. There were some tinker mackerel going through and I love small mackerel. So I put some ham on my fly rod; I like to trout fish. I tossed it out the window and just as I did, a seagull came down and scooped it up, and there’s a seagull on the end of my line! The people on the drawbridge shouted, ‘He’s catching seagulls! Look!’ I didn’t know what to do, so I kept winding it in and finally gave it a jerk, and off went the seagull 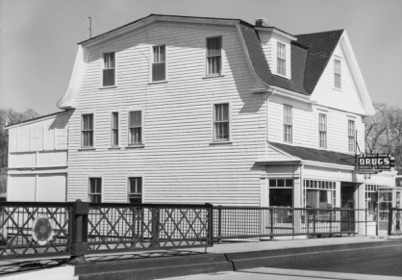 Ed Jaskun and his family lived over the drugstore on the second and third floors. He said the view from the third floor was the best in Woods Hole. The two windows on the first floor were where he fished and tossed down 6-packs of beer to passing boaters. WHHM Archives.

“I used to sell these hats, fishing hats, in the old drugstore. This gentleman came in; he bought a hat and he was going fishing. I watched him. He went out and went over the bridge and a thirty-mile-an-hour gust hit him and off went the hat, you know. I wondered what he was going to do. So he came back in again, got another hat, paid me, put it on, walked across the bridge. The wind hit him again and off went the hat again! Well, about the third time, I thought, well he isn’t going to come back. Back he came! He said, ‘This time, I’m going to hold onto it!’ He went across the bridge holding onto it. It was so comical.”

“They (fishermen) used to come by in boats, like on a Saturday, going out fishing. Of course, I sold beer and wine and liquor, too. So they’d holler, ‘Ed!’ I’d go to the window and they’d say, ‘Four six packs!” O.K., so I’d go over and heave them out the window. Then I’d throw my fly line out and they’d put a $10 bill on it and I’d drag it back in. “We’ll be back later for the change!’ ”

Mr. Jaskun commented on “hurricanes, which came in ’38, ’44, ’54 and ’56. You can add to whatever I say, or tell me I’m lying; I don’t really mind, you know. But why do they come in even years, is something I never understood or nobody else seems to be able to explain. But we haven’t had a hurricane for twenty-three years, but this is 1979 so we’re safe this year!”

From a 1984 Conversation with Gary Metcalf, a retired physical oceanographer, titled “The Year There Was No Bridge, 1939.” The Eel Pond bridge had been destroyed in the 1938 hurricane. Metcalf and his mother had visited Woods Hole in 1937; he returned in 1939 to be at the MBL.

“I remembered that in 1937 there had been this big black, steel bridge down there across the Eel Pond, and we’d driven across it in going back home. But in 1939, of course, that was gone. In fact, as I remember, it was lying over here on the beach where the Swope Building is now. They had pulled it up on the shore a little. They built a wooden bridge – oh, on a foggy morning it looked like a Japanese print, this big, high arch of a bridge. It was built just high enough so the Nereis could get under it from the MBL for the collecting work.” “Of course you couldn’t drive across it so all the cars had to go around. I guess it put a number of young kids out of business who had been charging a few cents to row people back and forth across the cut in their skiffs up to that time.”

“I don’t know much about the politics of the thing, but I got the feeling that the Town had hoped that the State would rebuild the bridge. The State was hoping that if they delayed long enough, the Town would get desperate and it would rebuild the bridge. So here it was, eight or nine months after the bridge had gone out and still nothing had really replaced it. So the way it seemed to me was that the Town figured that they would replace the bridge with something automobiles could get across but they would make very sure that it was not, by any stretch of the imagination, a permanent replacement. They were still hoping the State would do it. So during the summer, they worked for a considerable period of time building a great, big log timber structure.” 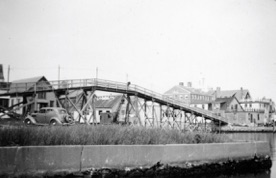 One view of the temporary timber “sky sidewalk” over the Eel Pond Channel. WHHM Archives.

“During the course of the summer, a whole gang of men were up there. They put in pilings and timbers, roughcut logs. It was an extremely heavy structure that spanned that thing, spanned the cut there. They mounted a couple of piles or kingposts on the west side of the cut. They weren’t more than nine feet high, but they were tremendously heavy timbers or heavy pilings that were put in quite deep. Then they laid out this plank bridge, thick, heavy planks and log catrails just reaching across the cut. This went on all summer long while they were hacking and hewing at these timbers.”

“I remember the day they decided to try that bridge out for the first time. A big crowd of people showed up, everybody in town. On each of the kingposts there were wires and pulleys and a hand winch on each kingpost. A couple of fellows started to crank on this thing and tighten up the wires and pretty soon it got pretty tough and they put two men on each winch. They creaked and groaned and sweated away there and the bridge came up about that far and plunk! The kingposts flopped down absolutely flat. And that was the end of that! 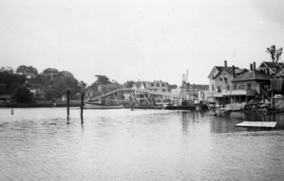 Another view of the temporary timber “sky sidewalk” over the Eel Pond Channel. WHHM Archives.

“There they were with their bridge all built and they couldn’t raise it and all they could do was tear it down. A huge roar of laughter went up from the crowd and we all went home.

“The next summer I came down here, the summer of 1940, a nice bridge was in its place and remains there to this day. But it was a fiasco and very funny to those of us who didn’t have any responsibility for it.”

The Museum Archives are open for research year round on Tuesdays and Thursday from 9:00am to 1:00pm and by appointment. Appointments are encouraged.