Reminiscences Of A Summer At The Breakwater Hotel, 1960 (Part 1)

Reminiscences Of A Summer At The Breakwater Hotel, 1960 (Part 1)

“You’re kidding! You’re asking me if I want to go with you to Massachusetts? For the whole summer? I’d be crazy if I said anything but yes!” And so it began. My brother had spent the previous summer working as a waiter at a hotel on Cape Cod and his employer had just written to ask him if he wanted to come back and work as the head waiter next summer. Larry hadn’t answered her yet. What ever gave him the idea of asking his 16 year old little brother if he wanted to go along, I’ll never know.

I like to think that I got out of school early that spring/summer but I’m not sure. It’s hard for me to imagine that happening but it could have. I do know that we were among the first summer employees to arrive at the hotel. Larry ushered me into the hotel to meet Miss Redfield. She was a dainty, petite, little old lady and the held a smoking cigarette between her fingers. I soon came to expect to see her always with a cigarette or have one lit nearby. Rumor had it that she smoked three packs a day but I never saw her inhale (shades of Bill Clinton). I often spotted burned out butts with long ashes attached lying in ash trays. Heloise was a very pleasant, grandmotherly woman.

A greeting hug for Larry and a hand shake for me, Miss Redfield looked at me, gave a little gasp and asked, “how old are you anyway?” I was mature for my age in some ways, but my adolescent baby face should have clued her that I really was just a teenager. I had turned 16 in March, about three months earlier. ”Well, I’ll find something to keep you busy”. That task didn’t take her long nor tax her imagination much. She put me in the prep kitchen making toast and coffee for breakfast, slicing and buttering bread, placing orders on serving trays, clearing returned serving trays of dishes and washing dishes. She explained that this would be only temporary until her regular prep kitchen man showed up, which he had done for some years now. 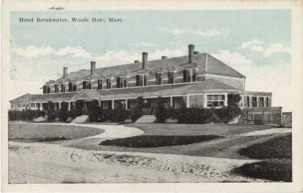 The food prep area for the hotel, while the service was solely for the dining pleasures of hotel guests (and employees, of course), was fairly large. The main kitchen was in the basement, on the ground floor with an outside entrance. Here the head cook, a middle-aged black (or dark-skinned Portuguese) lady was the only member of the cooking staff to have arrived so far. She had the responsibility for all the food preparation which she cooked on the huge, at least 8 foot long, iron, gas range and oven. Once prepared, the food was loaded on a dumb waiter and sent up one floor to the prep kitchen. When the staff was full, there would be a head waiter and two waitresses. Soon after our arrival, we started serving a trickle of hotel and dining room guests which grew to as many as about 30 people dining all together, comfortably, in the bright window-rich dining room furnished with a couple dozen two and four place tables. The staff cleared and cleaned each table after each use. Our tables all were covered with a linen table cloth, then set with place mat, plate and silverware and a hurricane candle. Whenever anyone had a free minute, he was folding linen napkins into a fan-shape selected and insisted upon by Miss Redfield.

Of course, each place setting was adorned by one of these signature-folded napkins. Outside, a driveway lead around the right side of the hotel, through a gate in the privacy fence. To the right was the employee bunk house we affectionately referred to as “the Shack”. I understand that it actually had been built as a shack and then converted into housing for the summer employees. Externally, the Shack was common, painted wood siding. It was divided into three rooms up and one larger, single-occupant room down stairs which was to be Larry’s room. The rooms, inside, were Spartan: a bed, and a stand but there was a closet and curtains on the windows. With the wall studs showing, the place had a camp cabin feel to it. Our toilet and bathing facilities were in the basement of the hotel proper, a few paces farther along the drive way, past the kitchen. The vista from the kitchen door was generally to the north. Seen across the backyard was the inviting beach which contained the mighty ocean. Actually I was seeing Buzzard’s Bay and, way over there, more of Massachusetts. It looked like ocean to me, though. It turns out that our location was pretty well sheltered but that knowledge was small comfort when a hurricane blew by that summer. That had me scared silly but I don’t recall hearing about any damage. Just another storm to the natives. 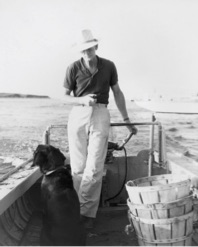 I grabbed for a chart. I think I we were abreast of Quicks Hole or perhaps a little further west. Eaton said, “Cut the engine.” I did and we drifted in dead silence, the kind that every mariner knows and fears. The sound of the cutter’s engine was gone, there was no sound. We drifted. Eaton said, “Make way, again.” I started the engine and ran slowly for perhaps 3 to 5 minutes. Eaton said, “Cut the engine.” Again we drifted. I asked, “What are you doing?” He said, “Listening for a bell.” We repeated the same routine maybe 4 or 5 times until we heard a faint bell. Eaton said, “There it is, steer for it.”

When we made the bell, he took the tiller and turned toward the southeast through dense fog. The first thing that came into view was the jetty at the entrance of Cuttyhunk Pond. Once inside the harbor, we tied up, boiled a couple of lobster, had a beer and went to sleep. In the morning, the fog had lifted and we made way for Point Judith.

The moral of this story is Bill Eaton was a mariner through and through with great presence of mind and familiar with the waterways. Without him that day I’m certain the boat would have come to grief.

Bill Eaton was the long-time Boatman for Naushon Island. He and John McClellan sailed frequently together in the 1960s. The bell buoy was the Nashawena bell at the channel fairway to Cuttyhunk. Bill Eaton above, photo by his wife, Betty Eaton.