Prosperity from Whaling Created New-Style Houses in the 1840s

Prosperity from Whaling Created New-Style Houses in the 1840s

In 1842 two new homes were built on the main road into Woods Hole village. One was near the Fays’ “Homestead” (Challenger) and the other was on the high corner where Water Street descends down the hill to School Street and Luscombe Avenue. They were both built in the new Greek Revival style, inspired by Greek temples, gable-end facing the street, wide corner boards and gutter returns, solid-looking window frames with little hollow squares on the upper corners and classically detailed front doors with pilasters. Both houses were faced with clapboard and painted white or light off-white colors.

Thomas Davis, his brother Jabez Davis and their cousin Owen Eldredge (or Eldridge) were in business together as ships’ suppliers, probably starting in the 1820s when the Swifts began building whale ships in Woods Hole and provisions and supplies of all kinds were needed for the long voyages. By 1842 the partners, Davis and Eldredge, were well-to-do enough to build brand new homes. Prosperity from whaling caused an explosion of construction in the village. New buildings, stores and houses were built all up and down Water Street.

The Davis house was three stories high, with a store on the basement level built into the hillside. The store’s entrance was on the side along the hill facing west. The family occupied the upper two floors; their front door, with elaborate moldings and side-pilasters, was on the second floor, accessed from a porch with stairs to the street level. The Eldredge house was a family dwelling with no store in the structure. It had a side-wing with a porch, not unusual on a gable-end Greek Revival house. 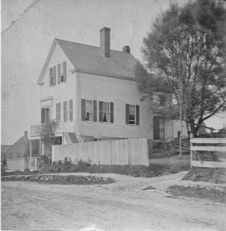 Both houses changed gradually over the years. The Eldredge house porch became trimmed with Victorian brackets and later yet this porch was enclosed completely. Both houses were eventually sheathed in asbestos shingles. In the case of the Davis house – later known as “The Job Shop” – the asbestos shingles became covered in dirt and lichens. The lovely square-cornered window frames remained on many of the windows but the porch was removed as well as the second-floor pilastered doorway. Another door was inserted on the first floor.

The Eldredge house is now owned by WHOI and is kept in good shape, although asbestos shingles still cover the walls. There are a few hollowsquared window frames remaining.

The Davis house, now owned by WGBH for its WCAI and WNAN radio stations, is in the midst of a complete exterior restoration. The asbestos shingles have been removed and replaced with cedar clapboards. Window frames with hollow square corners have been copied from the few remaining originals. The entire structure has been painted two shades of a lovely pale cream color. Its position on the high corner above the village makes it shine like a new marble temple.

Work has ceased for the winter season but next spring will bring the completion of a second-floor pilastered doorway and new porch across the second floor front and perhaps shutters in a dark color.

Congratulations to WGBH-WCAI for the stunning restoration of a long-drab and neglected building. Some of the funds used for this work came from a Town of Falmouth CPC grant.