I was asked to write something about the history of the Fishmonger, the restaurant which has been in existence since the early 1970s at the Woods Hole drawbridge. Last year it went out of business and the restaurant has become the Water Street Kitchen. Frances Buehler still owns the building.

Nick Witzell, Bill Dyer and Rollie Beliveau talked to me about their memories of the place. Tom Renshaw, at my request, wrote an extensive piece on the history of the building and restaurant. There was more detail in this than I could use but I am very grateful to Tom for setting down all this important information for the record.

These recollections are those of men in their 60s and 70s, so please be forgiving of inaccuracies and let me know if you have corrections or more information.

The building that has been home to the Fishmonger restaurant has had a long and varied history. It dates back to at least the 1880s when it shows up on the Bird’s Eye View Map of Woods Hole of 1887. On that map it is labeled “E.F. Donnelly – Fruit, Confectionary, Tobacco & Reading Material.” 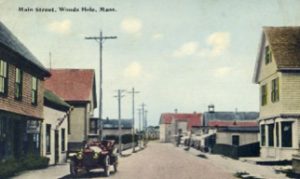 The Sea Robin Tea Room (site of the Fishmonger), with a barbershop by the Channel. Across the bridge the long low building housed the Ideal Lunchroom and Home Bakery. Postcard from WHHM Archives.

Like many properties around Great Harbor the lot on which the building stood was owned by Walter O. Luscombe. By the teens and 1920s it was the Sea Robin Tea Room, a popular type of destination for ladies at the time. Beyond it right by the bridge was the first of many barber shops in that location, originally built out on pilings over the water. Al Blanchard was the last of them in that building.

In the 1920s on the east end in the rear section of the building was The Bookstore, which was also a publisher and printer of handsome small booklets, brochures, illustrations and maps, many of them done by talented local artist R.L. Dickinson. This back area eventually became an ice cream parlor.

In the 1930s and 1940s the main part of the building housed the restaurant known as the Twin Doors. By the 1950s the building was owned by Philomena (Phil) Paine and her brother Joe DeSorbo – “P” and “J”. There was an ice cream parlor known as P.J.’s Dairy Freeze at the east end with a take-out window on the street side and a window with a picnic table facing the parking lot, all very popular with local kids. They sold frozen custard or soft ice cream from a machine that had vanilla, chocolate and coffee flavors, sometimes made into sundaes, and hot dogs and hamburgers. Tom Renshaw remembers that owner Joe DeSorbo was great at making conversation. “Peter Bumpus, Allan Gordon and I used to saunter up to the window and say I’ll have a glass of water – make it two – make it three. Then we’d chat with Joe and eventually buy some food or ice cream.”

P.J.’s was run for a time by Bruce Trepazzo. He and Jimmy (“Red”) Gifford also ran the teen center in the basement of the Community Hall. Phil Paine had a beauty parlor in the middle of the structure. Joe’s wife Ginny became more involved with the business and the ice cream window expanded towards the rear and a lunch counter was installed.

Around the time of the early 1960s the restaurant expanded into the space that had held the beauty shop and the barber shop run by Al Blanchard at the side of the channel and took over the entire first floor. Upstairs was an apartment which was accessible from an outside staircase at the back of the east side. Jack and Bobby Schar and Rollie Beliveau lived there in the early 1960s.

In 1966 Joe did a lot to make the building more stable on the west side and a concrete foundation was poured in the location of the triangular section. A triangular deck on pilings was also added. Tom Renshaw did one of his first jobs for Dan Clark, working with Steve Clark on this project.

A little after this time Joe and Ginny passed the restaurant business over to Alda Doughty. She called it The Channelside. Alda was Jerry Cotter’s girlfriend; he was the bosun of the “A-Two” (Atlantis II), a WHOI research vessel. 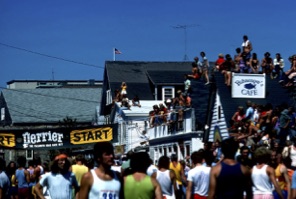 The original Fishmonger restaurant on the Eel Pond side of the Channel at the start of a Falmouth Road Race before 1978. Courtesy Susan Fletcher Witzell.

In the early 1970s Frances Buehler began the restaurant called Fishmonger’s across the street on the Eel  Pond side of the bridge. This site along the Channel had  been the site of many businesses. In the early 1900s the  land was owned by Isaiah Spindell. Early on a restaurant  there was called The Ideal Lunchroom and Home Bakery.  An infamous bar on the site in the 1930s and 1940s was  called The Rendezvous, a rougher place than the adjacent  Cap’n Kidd. There was still a bakery called Woods Hole  Home Bakery along the channel side. In the 1950s the restaurant was called Scotty’s, and the small section by the  bridge was Putnam’s Bookstore. An occupant in the 1960s  was The New Bedford Bargain Store. After the Fishmonger  moved across the street, a restaurant called The Black Duck  was there for many years. This was named not for the common local duck but for the infamous rum-runner The Black Duck which had ended up as a hulk moored behind the building and used as a houseboat. After that the space was occupied by a restaurant called Phusion and although the business is still owned by the same person, it has a new chef and the name of 41-70 (the latitude and longitude of Woods Hole). 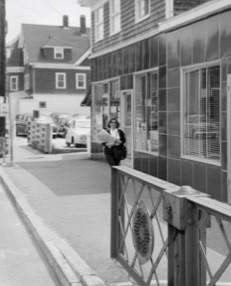 Alda heard about the difficulties that Frances Buehler and the Fishmonger restaurant were having with their landlord and arranged the sale of the building from Joe DeSorbo to Frances in 1978.

Frances hired Tom Renshaw to replace the plate glass windows with regular 6 over 6 windows and replace the blue enamel siding with shingles. The interior was opened up and included the deck built out over the Channel. Woodwork, flooring, table tops and counter were built from salvaged yellow pine taken from the demolition of the base hospital at Otis AFB-Camp Edwards. The 6 over 6 windows came from the base hospital corridors. Other timbers came from a barge wrecked in West Falmouth. The new restaurant opened in December 1978.

Since then an addition on the east side accommodated interior stairs and an enlargement of the cellar. The deck has received a proper roof and in 2011 a new entrance was added on the left front.

Frances has leased the business to a number of chefs over the years but in 2015 the Fishmonger as a business closed. Frances has retained ownership of the building and has now leased it to a new business, the Water Street Kitchen.