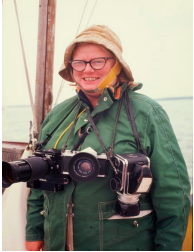 In January 2022, the museum received an extensive collection of photographs from longtime summer Woods Hole resident, Dorothy (Dottie) Crossley, who passed away in December, 2019.

After graduating from Smith College in 1950,  Dottie embarked on a pioneering career as a female sports photojournalist for the next 50 years, documenting countless skiing and sailing events.

She had a home in New Hampshire where she captured the growth of the New England ski industry. She covered the Cape Cod sailing scene for the Falmouth Enterprise and these original photos make up a large part of this donation. She usually photographed local races on board the WHYC committee boat, Cigana. We’re pleased to be able to share some of these historic images.

Things must have gotten pretty breezy during the 1981 Knockabout Nationals in Woods Hole. Cigana captain, Kit Olmsted, assisted one capsized boat by manning the pumps.

In addition to racing, she documented  decades of other yacht club events. 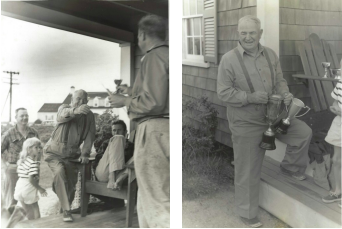 Photos from 1951 show fish market owner, Sam Cahoon, at the club house with his trophies. He was renowned as a sailing master and professional skipper.

The 1959 WHYC picnic at Tarpaulin Cove on Naushon Island was a multi-generational affair.

Foul weather did not deter her from taking hurricane pictures, starting in 1944 up to Hurricane Bob. 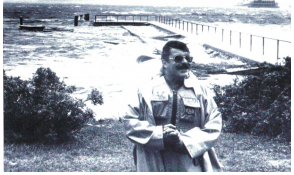 Dottie’s caption for this photo to the right: WELL, FOLKS, IT’S GOING TO BLOW! WHYC Steward Skip Crowell delivers his expertise as Hurricane Bob approaches in 1991.

And blow, it did, as anyone who was in the area in August 1991 will remember.

The Penzance guard shack on Bar Neck Road.  Dottie’s car was not spared.

In calmer weather, she was often up in a plane doing aerial shots of the area. 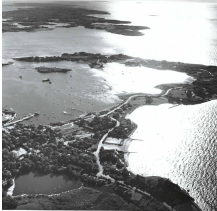 This shot from 1959 shows Great Harbor, Penzance Point and the Elizabeth Islands.