The popular bar and restaurant in Woods Hole known as the Cap’n Kidd originated as an ice cream parlor and confectionary store. Around 1916 or 1917 Mrs. Ernest Rohmeling sold her store on the site to Harry Daniels. The building was built over pilings. The land was owned by Isaiah Spindel, who owned many plots around the Eel Pond Channel. Mr. Daniels had a retaining wall built and the land filled. He also put on an addition, adding a basement and a new front. The new addition was used for the sale of wine and beer. The original store sold ice cream, confectionaries and tobacco.

Mr. Daniels made his own ice cream until about 1929 or 1930. At that time he began selling lunches, soup and 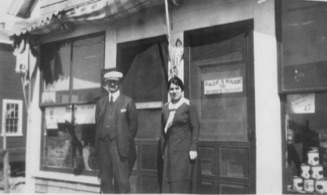 Mr. Daniels with a clerk in front of the original ice cream parlor, 1918.
WHHM Archives, from Elsa Keil Sichel

chowder, as well as breakfast, and began buying his ice cream. He called the restaurant The Oasis.

One of the most popular menu items, especially with MBL summer people who spent time there after evening lectures, was a Salted Kiss Sundae. It was made of vanilla ice cream smothered in hot butterscotch sauce and topped with whole salted peanuts.

When Mr. Daniels died in 1939, The Oasis was taken over by Antone Augusta and his wife Leoni. Augusta changed its name to the Cap’n Kidd. 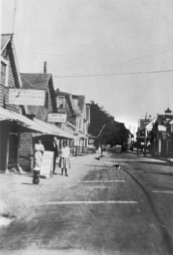 Along the Eel Pond Channel on the north side of the Kidd is a building partly built out over the Channel’s water. This small building has been both restaurant and bar. In the early 1900s it was known as The Ideal and housed a restaurant and bakery. Some Portuguese immigrants of the time, boarding and working in Woods Hole with no permanent address, used it as a place to receive mail. Its owner was Anselmo Durien, originally from Puerto Rico. The building became the Rendezvous Bar sometime after 1938 when Durien left Woods Hole for Waquoit. It was always a rougher bar with sailors and fishermen as its patrons as contrasted with the Cap’n Kidd next door. Since then it has housed many restaurants.

Antone Augusta operated both the Cap’n Kidd and the Rendezvous from about 1939 to 1941 when he died. His wife, Leonie, ran both places after that. The Kidd was formally sold to the Augusta family by Harry Daniel’s daughter Harriet in 1946. Leonie and her son Jack Cauley ran the Kidd. Leonie had been married to William Cauley before she married Antone Augusta (see sidebar, below).

The Kidd was always a colorful place and little changed in its decoration for al most 70 years. Pirate murals were painted on the walls by Lloyd T. Nightingale and Joe Miron in 1946. The round tables were supported by huge barrels; nail kegs with nailed-on leather tops formed the seating as well as built-in benches along the walls. Leonie had a green parrot who whistled. She had trouble over the years keeping a year-round liquor license and there were many years when she closed for the winter and went to Florida, and sometimes on to Cuba. (Story continues after sidebar.)

Patrick Cauley emigrated from Ireland in 1862 at age 12. He moved to Maine in the early 1890s from New Hampshire with his wife Bridget. They had 7 children and owned a gable-end Greek Revival home on lower Main Street in South Berwick. In the 1890s the Cauleys had a confectionary store in the basement (street level) of the house, under the name Sullivan & Cauley Confectionary; the family lived upstairs. The confectionary store carried a “ FIRST CLASS STOCK OF CONFECTIONARY, CIGARS, FRUIT, ICE CREAM, ETC . which we sell at the lowest prices consistent with the quality of the goods, TRY OUR HOME MADE FUDGE – Ice Cream and Pure Fruit Sodas and College Ices a specialty” (1925 South Berwick Town Report). In 1926 the store passed to the ownership of Alfred J. Seymour. It was there that Alfred’s daughter Leonie met and married the youngest Cauley, William.

By 1939 Leonie was married to Antone R. Augusta, a Falmouth native. In 1939 he leased the former Daniels restaurant from the Daniels family and ran it as the Cap’n Kidd. He also ran the neighboring channel-side restaurant as the Rendezvous. Antone died November 14, 1941 and Leonie took over the management of both places. The Kidd was formally sold to the Augusta family (meaning Leonie) by Harry Daniels’ daughter Harriet in 1946.

By then Leonie was married to Theodore L. Chase and newspaper articles about the Kidd refer to her as Leonie Chase. In 1950 they divorced.

Her fourth husband was Dr. Donald R. Charles, a cancer researcher who spent summers at the MBL. He taught at a number of universities and colleges and became head of the biology department at the University of Rochester in 1948. In 1954 he retired because of ill-health, suffering from Hodgkin’s disease (as it was called then). Dr. Charles died in 1955, possibly a suicide, as reported in his obituary in the Enterprise.

John Edward Cauley, Leonie’s son from her first marriage, became the manager of the Cap’n Kidd and worked along with his mother for many years as well as being a general contractor and house builder. 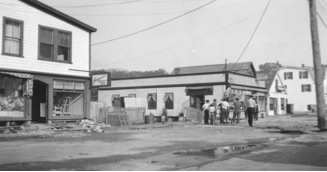 After the 1938 Hurricane: N.E. Tsiknas Co., Inc. (later the Woods Hole Market), left, and The Oasis (right). The space between the Daniels building and the Market has gradually been filled in.
WHHM Archives.

In 1960 Tom Vahey wrote in a “Falmouth After Dark” column in the Enterprise : “Speaking of atmosphere, which somebody usually is, one of the few authentic Cape Cod-type places is the Cap’n Kidd in Woods Hole. There’s no chromium, formica or other stuff like that and the only thing that’s wall to wall is the bare floor. The tables are rough wood and the chairs are nail kegs and the bar is mahogany; it is, as Red Wright the public information feller of the Oceanographic, says, “a real bar.” Possibly the longest bar on the Cape, with a marble armrest, it was imported from the old Rockingham Hotel in Lowell, as was the back bar with its huge columns.”

In a 1946 column in the Enterprise called “Our One Saloon Town” it was stated that “Only Mrs. Chase offers us unabashedly, the saloon.” “You find it tucked away under the shadow of an institution for oceanographic research, stone’s throw from one of the world’s greatest biological laboratories, next door to our town’s swankiest summer homes. It is Woods Hole, that village of many facets, which again testifies to its individuality by fostering Mrs. Chase’s saloon. On Woods Hole waterfront Mrs. Chase dispenses ‘topside chow’ (than which there should be none better) from her ‘mess deck’ and ‘toddy’ from her saloon.”

Leonie’s 4th husband, Dr. Donald Charles, died in 1955. Leonie continued on as the proprietor of the Kidd with her son Jack as manager until it was sold in the late 1960s to several teachers who ran it summers only. By then the back deck had been enclosed with glass as it is today and the pier out back was extended. The parking lot between the Kidd and the market was partly used for another addition.

Sometime in the 1970s the Kidd was bought by the Crowley family. The wing between the bar and the market was made into a two-story building with a restaurant serving fine food on the first floor. The bar continued as it had since the 1940s with marble bar, nail-keg seating around circular table tops supported by barrels and pirate murals until about three years ago. At that point, the old tables and nail kegs disappeared (except on the glassed-in back porch) and were replaced with high round wooden tables, sleek sage green leather banquettes and high chairs (both with nail-head trim – perhaps a nod to the old nail-keg seats). The walls were cleaned and lightened (except for the murals). This modern style has taken away from the gritty authentic atmosphere that made the Kidd so well-loved. It is no longer a saloon, a dive or even “a real bar.” 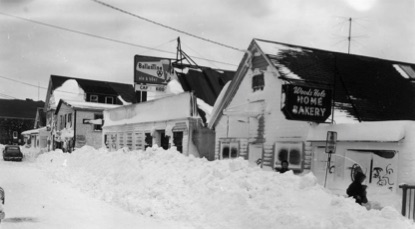 A big snow storm, late 1940s. The Woods Hole Home Bakery, right, (Sullivan’s or Sullie’s) is on the site of the Rendezvous by the Channel. Beyond that is the Kidd (called Capt. Kidd) with its Ballantine Ale & Beer sign and N.E. Tsiknas store. It looks like an artist visited the snowy window of the bakery!
WHHM Archives.