Atlantis Stories Is Back in Print

Atlantis Stories Is Back in Print

Atlantis Stories is the memoir of a young man who signed on as an Ordinary Seaman aboard the Woods Hole Oceanographic Institution’s 143-foot sailing vessel, the ketch Atlantis, when she was conducting early research on antisubmarine warfare. 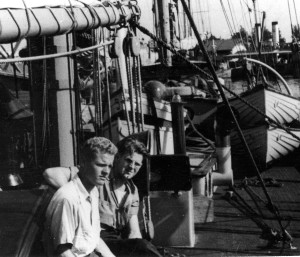 His words bring to life the excitement and hardship of serving before the mast on the world’s largest ketch. Cooper’s teachers aboard were mainly Scandinavian seamen from a past maritime age—the old-time seamen who had been trained on the hard road to Cape Horn and the North Atlantic in winter, who sailed in the big schooners and the large racing yachts of the past, including the magnificent J-boats of the 1930s. They teach him seamanship, the shipboard ethic of the professional sailor, and their patient acceptance of hardship before the mast. Set in the global convulsion of World War II, Cooper’s seagoing education is punctuated by many of the milestones of that era: D-Day; U-boat actions; the bombing of Hiroshima; the death of President Roosevelt; and the ultimate surrender of Germany. Though lacking formal education, Cooper displays wonderful prose and story-telling skills. His book forms a compelling story, filled with nautical fact and lore, adventure, the sailor’s humor, and Cooper’s own sense of fair play and justice. 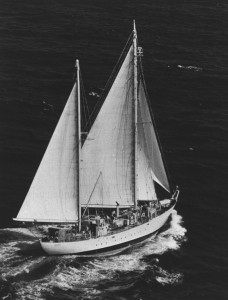 The Atlantis under sail

Cooper’s interest and inspiration was captured by the graceful and sea-kindly whaleboats carried as lifeboats aboard the Atlantis, and by other small boats encountered in far ports around the world. In the end, this defined his life’s work as a builder and designer of wooden boats. After his days aboard Atlantis in the 1940s, Bill Cooper worked in or operated wooden boat shops while he and his wife, Judy, raised their five children in Falmouth, Massachusetts. In the course of his life he mentored many young men and women in boat building and repair. He also served for 20 years in local government as a Member of Town Meeting. He was outraged by injustice and was sometimes known, when aroused, to take contrary positions. In one instance he filed a case with the U.S. Supreme Court (which declined to hear it). Bill spent much of his last decade of life instructing wooden boat-building and restoration in the boat shop operated by the Woods Hole Historical Museum. 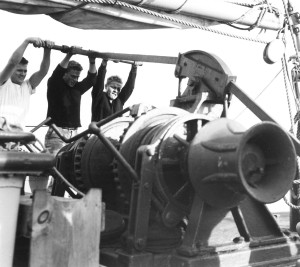 Bill Cooper and others at the anchor windlass

The principal editor of this volume is Arthur G. Gaines, Jr. who holds a doctorate in Oceanography and presently carries the title of Oceanographer Emeritus at the Woods Hole Oceanographic Institution. He has spent about one year aboard research vessels at sea, including six cruises as Chief Scientist aboard R/V Westward, a 125-foot staysail schooner operated by the Sea Education Association in Woods Hole. He currently sails an 18-foot catboat with his wife, Jennifer, among the Elizabeth Islands of Cape Cod. Jay Burnett, also editor, spent 28 years as a fisheries biologist with NOAA Fisheries, including over two years aboard fisheries vessels conducting research at sea. He and his wife, Susan, also a sea-going scientist, make their home near Woods Hole. Both have gained a profound respect for those who served aboard the ships. 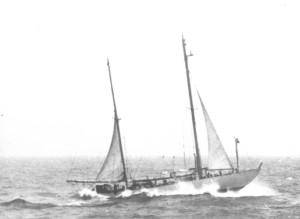 The Atlantis at sea